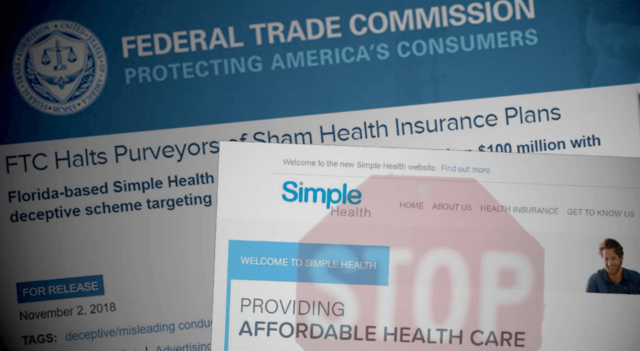 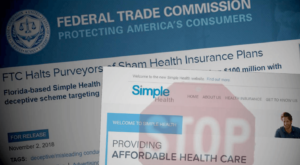 But the consumer protection agency can’t help the consumers unless and until it convinces a federal judge to keep the Hollywood-based company closed and in a receiver’s custody until the case is resolved.

Simple Health has been shut down since Oct. 31, when it was served with a temporary restraining order.

The FTC is accusing the company of running a boiler room operation that misled tens of thousands of consumers into believing they were buying major medical insurance covering pre-existing conditions, hospital stays, in-network visits to primary care physicians and specialists, prescription drugs, and other services required by the Affordable Care Act.

In reality, the consumers were sold a package of discount plans plus limited-benefit hospital indemnity coverage that paid a maximum of $3,200 a year while Simple Health Plans, its co-founder Steven J. Dorfman, and affiliated companies collected more than $150 million in commissions since 2013, the FTC says.

The FTC’s Dec. 21 filing opposed a request by Simple Health to postpone a planned Jan. 29 hearing to decide whether the company should remain indefinitely closed and under control of a receiver while the case proceeds in U.S. District Court in Miami.

Despite the request, Judge Darrin P. Gayles postponed the hearing and said it would be rescheduled in a Jan. 16 telephone conference call with attorneys for the two sides.

Exhibits filed by the FTC quote consumers saying Simple Health sales reps assured them they were buying full medical coverage. Only after they found themselves deep in debt for medical procedures or unable to buy prescription drugs with their “health insurance cards” did they realize they had been duped, the consumers said.

The FTC said in a Dec. 4 filing that it learned from Tampa-based Health Insurance Innovations, third-party administrator “for most of the products sold by” Simple Health and its partners, about the “nearly 37,000 subscribers [who were] subjected to Simple Health’s deceptive sales pitches and are currently enrolled in limited benefit and discount plans.”

Delaying the Jan. 29 hearing would “harm” the nearly 37,000 subscribers, the FTC argued in last week’s filing. “The ongoing billing of these consumer victims must be addressed as soon as possible so that consumers do not continue to be harmed,” the FTC said.

Monthly premiums for Simple Health’s plans varied, FTC exhibits show. Based on the agency’s figures, remaining customers are paying an average $170 a month.

Asked by the South Florida Sun Sentinel what remedies it plans to propose at the hearing, an FTC spokeswoman said only that the agency has nothing to add to its public court filings.

Executives and attorneys for Health Insurance Innovations did not respond to emails asking whether the company is willing to refund premiums for policies purchased through Simple Health Plans or agree not to pursue payment for the balance of policy terms if consumers cancel.

Health Insurance Innovations, which had longstanding ties with Simple Health, itself has fallen under scrutiny by regulators.

On Dec. 12, the company announced that it had entered, along with subsidiary Health Plan Intermediaries Holdings LLC, into a settlement agreement with regulators leading a 43-state investigation into its sales, marketing and administrative practices.

Terms of the settlement call for Health Insurance Innovations to pay $3.4 million, improve its monitoring of sales calls both internally and by external distributors, develop a “disclosures plan” to ensure consumers are made fully aware of what they are buying, and to better train internal and external sales personnel on how to comply with insurance laws.

Yet, a summary of bank records examined by the FTC and included in exhibits filed in the Simple Health case revealed that Health Insurance Innovations paid about $145.7 million in commissions to Dorfman-owned Health Benefits One, a co-defendant in the FTC case, between January 2015 and April 2018. That represents about 37 percent of all third-party commissions Health Insurance Innovations paid between January 2015 and June 2018, based on financial statements filed to the Securities and Exchange Commission.

Scams come in all shapes and sizes. And they definitely don’t discriminate when it comes to their victims. I’ve seen many healthcare scams in my day. This was just on a very large scale. It’s one thing to lose your money, it’s another when you’re paying a monthly payment for health insurance only t o find out you don’t have any health insurance! I know the kind of sentences that come with these scams. You’re probably looking at a minimum 10 to 12 years and that’s a minimum sentence. There’s absolutely no way that any of the victims could be made whole.

They all lost out big time. Remember, these are every day consumers. They don’t have a chance in hell of getting a nickel. But the Bernie Maddoff victims who were mostly millionaires and billionaires have almost all been made whole. How do you explain that? It’s called a corrupt legal system. Poor people are usually poor because they’re too dumb to get rich. Therefore, they pay higher interest rates, more in taxes, simply because they don’t know any better. With rich people, it’s the opposite. Number 1, very few rich people would fall for this type of sham because they’re too smart. Number 2, simply put, rich people know better.

Here’s the irony of the whole scenario: What sums up our legal system and our political system in this country? The poor suckers who lost their money to this fraud are just that, poor suckers who lost their money. Doesn’t make sense, but that’s the way it goes. As Bernie Maddoff’s rich victims all get paid back by the government, hard working common people never will. The only justice they’ll ever get is seeing a guy go to jail who blew all their money anyway. How sad. What a world we live in. In retrospect, education is the key, “knowledge is power“, sorry for your loss.

Disney pays $23 million for ranch land near Celebration. See what the Mouse might...