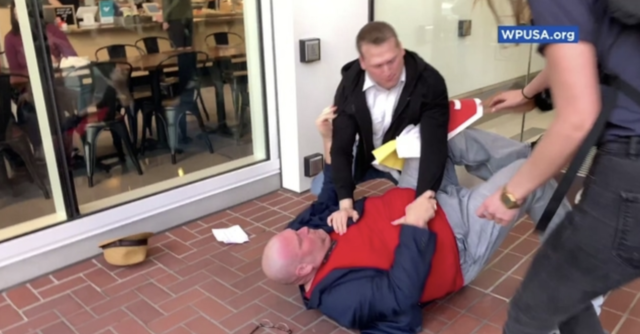 “We just wanted to come in and hand a petition and go away,” the driver told BuzzFeed News. 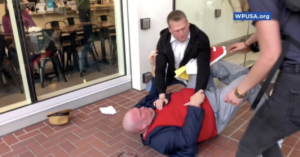 An Uber driver attempting to deliver a petition to the ride-hailing company’s headquarters in San Francisco was tackled and brought to the ground by a security officer Friday afternoon.

Video of the incident shows a half dozen sign-holding protesters trying to enter the building at 1455 Market St. in San Francisco where Uber is headquartered. When one man — a driver named Thom Hoffman — almost makes it inside, a security worker in a black hoodie grabs him from behind and drags him to the ground.

In an emailed statement to BuzzFeed News, Uber’s director of physical security, Carla Gray, said the security officer in the video works for a third-party contractor and had been put on administrative leave while “the matter is being investigated.”

“We are very concerned by the video. Our security policy is to ensure the safety of those in and around our facilities, and we will not tolerate any actions that are not in line with that policy,” the statement said.

The building in which Uber is headquartered is owned by Hudson Pacific Properties; a spokesperson for that company said they were aware a protest outside Uber was planned, but not that a violent altercation had taken place. The security vendor Uber uses is Securitas.

The approximately 15 drivers present at Uber headquarters were part of a group called Gig Worker Rising, a coalition of labor groups including Working Partnerships USA. They were attempting to deliver a petition, which has been signed by over 3,200 people, asking for a meeting with Uber executives. At the meeting, drivers involved with Gig Worker Rising hoped to discuss policies around driver ratings and deactivations.

Hoffman, the driver who was tackled, told BuzzFeed News he had hip and shoulder pain following the incident and plans to be examined at a hospital. He is considering pressing charges.

“We weren’t there being aggressive or hostile,” he said. “I feel like that action was uncalled for. We just wanted to come in and hand a petition and go away.”

Hoffman, who has been a part-time Uber and Lyft driver for about three years, said the drivers with Gig Workers Rising tried to enter the building after extra security guards stationed outside refused to respond to their request. “We only wanted to walk into the lobby and go to the front desk and say, ‘Can you deliver this to the appropriate person?’”