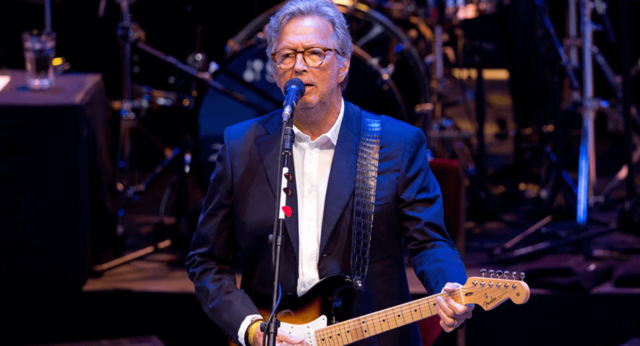 “Can I call you Mummy now?” supposedly said Eric Clapton when he found out the woman he was told his entire childhood was his sibling, was actually his mother. Eric would have been 9.

Clapton’s mother was Patricia Molly Clapton. She gave birth to the baby boy who grew up to be among the greatest rock’n’roll stars history has ever seen, at her young age of 16.

Eric Clapton’s father was Canadian by origin, a WWII soldier serving his time in Britain as the war in Europe was coming to a conclusion. His name was Edward Walter Fryer and was 24 years old when he met Patricia.

The two met in a local Surrey pub. Fryer was staying in the vicinity as part of his military duties but was that night hosting a music gig to earn some extra bucks, something which he had been doing for a while.

Clapton never adopted his father’s surname, instead, he was given his mother’s maiden name once he was born on March 30, 1945, in the village of Ripley, in Surrey.

Children out of wedlock back then were quite stigmatized by society. Eric Clapton was one of the many children all born to British women who got involved with Canadian soldiers in Britain during the war out of wedlock.

As Patricia was also a too young, a plan was made in the family which entailed telling young Eric Clapton he was the child of his mother’s parents, and that he and Patricia were not bonded by a mother-son relationship, but were merely siblings.

Basically, Eric’s grandmother–Rose Clapp, and his mother’s stepfather Jack Clapp, were the ones to enact the parental roles for him.

Not that those roles were fulfilled perfectly. Young Eric Clapton would have overheard gossip in which someone else is being referred to as his real mother.

While Eric was still a toddler, his mother Patricia met another Canadian and married him, Frank MacDonald. The young Eric was practically abandoned as Patricia moved to Canada for a while and also lived in Germany. With MacDonald, she had two other children.

When she came back home to England when Eric was nine, it was Rose Clapp who revealed the family secret to Eric. She told him the visitor he believed was his sister was his mother.

Finding out the truth must have been confusing enough for the young Clapton. Perhaps it was this most intense personal experience that pushed him to find refuge in music, playing the guitar. The first acoustic guitar he received as a gift was when he was 13 years old.

Commenting on this estranged relationship between a mother and son, Eric Clapton is later noted as saying: “My mother and I didn’t really hit it off that well. The best period of our life was as adults, when we were drinking together. I loved her but she was a difficult woman.”

“Our relationship developed as friends. Whenever I needed a mother figure, she wouldn’t be the person I’d go to,” according to Daily Mail.

As for his biological father, Clapton never had the chance to meet him in person. Edward Fryer passed away in 1985, after developing leukemia. Only years later was the Canadian traced to be Clapton’s father.

Before that, Clapton merely knew the name of his father, information that passed to him again by his grandmother. He would eventually be told Edward Fryer also had an excellent ear for music.

The kind of person who would hit the road often, Fryer was further involved in other relationships and left his unknown son several other half-siblings. Clapton also found out that one of his half-sisters from his father’s side happened to be a huge fan of his.