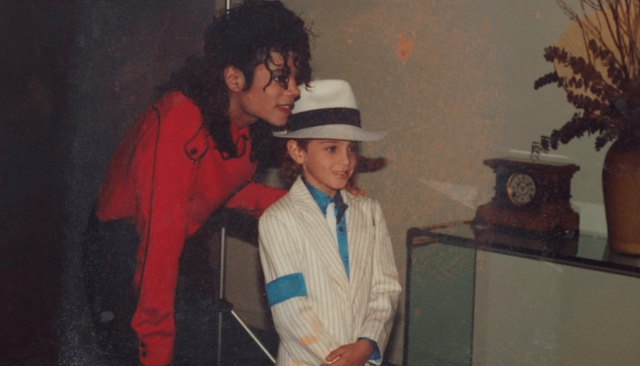 “We’re getting real, really early,” festival director John Cooper said Friday morning as he introduced the four-hour documentary, which details allegations of child molestation against the late pop icon. Police officers were stationed outside the Egyptian Theatre in case of protesters, and health care professionals were on hand in the lobby for audience members who could be triggered by the film’s graphic descriptions of sexual abuse involving minors.

Robson and Safechuck each filed lawsuits against Jackson’s estate in 2013 and 2014, respectively, although judges denied both for technical reasons and did not evaluate the merits of the allegations. Both men were on hand for Friday’s screening in Park City, where they tearfully appeared with director Dan Reed.

“Neverland” centers on accusers Wade Robson, 36, and James Safechuck, 40, who allege that Jackson began sexually abusing them at ages 7 and 10, respectively. At the time, both boys were diehard fans with entertainment aspirations of their own: Robson, who went on to choreograph for Britney Spears and ‘N Sync as an adult, met Jackson after winning a dance contest during the singer’s 1987 Bad tour in Australia. Safechuck, a child actor, appeared with Jackson that same year in a Pepsi commercial and says he began to hang out regularly with the star in Los Angeles.

“Neverland” has drawn intense backlash from the musician’s fans since it was announced earlier this month.

The star’s nephew Taj Jackson called the documentary “a one sided hit job” on Twitter Saturday.

In a statement to USA TODAY following Friday’s premiere, Jackson’s estate said that the project “isn’t a documentary, it is the kind of tabloid character assassination Michael Jackson endured in life, and now in death. The film takes uncorroborated allegations that supposedly happened 20 years ago and treats them as fact. … The two accusers testified under oath that these events never occurred.”

The statement goes on to say that Robson’s assault allegations “suddenly emerged” when he “was denied a role in a Michael Jackson-themed Cirque du Soleil production.”

Here are five allegations presented in “Neverland,” which premieres on HBO this spring.

2. He would allegedly run drills with James Safechuck to avoid getting caught

At the start of their relationship, Safechuck alleges that Jackson would regularly test him on how quickly he could put on his clothes as quietly as possible. When Safechuck’s or Robson’s parents stayed at the same hotel, both men allege Jackson often ensured they were staying down the hall or on different floors from the suites Jackson shared with the boys. He also had multiple locks and thick wooden doors installed throughout Neverland Ranch, where Safechuck claims they had sex inside his castle, pool, attic and train station.

“It happened every day,” Safechuck says. “It sounds sick, but when you’re first dating somebody, you do a lot of it.”

Jackson would repeatedly remind the boys that they could never share anything about what they did: ” ‘If anyone ever found out that we were doing these sexual things, we would go to jail for the rest of our lives,’ ” Robson recalls him saying. “I was terrified.”

Years into their relationship, which lasted until he was 14, “we were like this married couple,” Safechuck remembers. There was one day when Jackson suggested they hold a mock ceremony at his condo, where they allegedly exchanged “vows” and he gifted the boy with a diamond-encrusted gold ring.

“I was really into jewelry, so he would reward me with jewelry for sexual acts,” Safechuck says in the film. He claims that Jackson would take him to jewelry stores where they would pick out rings, acting as if the gift was for a woman.

4. Wade Robson claims he was ordered to throw out his underwear after they had sex

After moving to LA to focus on dancing and to be closer to Jackson, Robson was devastated to learn that the singer had “moved on” to other boys including Macaulay Culkin and Brett Barnes (both of whom have denied that Jackson sexually abused them).

“There was jealousy from me,” Robson says. “It was confusing.”

After a few years of occasional encounters, the singer allegedly summoned a then-14-year-old Robson to his hotel room, where he had sex with the teen. The next day, Robson says Jackson called him demanding that he get rid of his underwear from the night before, in fear that Robson’s mother would discover it. It was the last sexual experience they had together.

As young children, both Safechuck and Robson claim that Jackson would try to turn them against their parents and make them hate women. He gave Robson nicknames such as “Little One” and “Doo Doo,” and would leave him daily faxes and voicemails saying how much he loved having a friend like him.

Leading up to his short-lived marriage to Lisa Marie Presley in 1994, Jackson would try to comfort Safechuck by telling him that he “had to have public relationships with women” but “it wouldn’t mean anything,” Safechuck says. The manipulation continued as they got older, as Jackson allegedly pressured both men to testify in 2005 that he never sexually abused them after he was charged with molesting 13-year-old Gavin Arvizo. Although Safechuck declined, Robson agreed to appear in court, citing an obligation to support his lifelong friend. Robson continued to defend Jackson three years later in an interview with Access Hollywood.

I must admit, after seeing this movie on YouTube, there is no denying Michael Jackson was a deranged pedophile! For whatever reason, I can clearly see why the 2 witnesses would lie in court back when Michael was being charged.

I can’t say anything more then just watch the movie (It’s 4 hours long). All the while Michael was lying to the world when he went on TV to proclaim his innocence!

The movie tells the story better than you or I ever could. Therefore, I’ll end here. Just watch Leaving Neverland and you will be in shock. I wasn’t because I already knew the ending before it ever got started, plain and simple me was deranged from his own lifestyle and a victim of his own lifestyle, success, and delusional derangement. How sad that there are few lessons to learn from this very well done documentary film. It simple proves the facts that so many intelligent, educated people already knew.