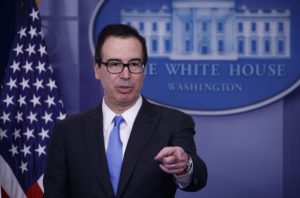 The Trump administration is proposing rules for investors in a new program that it says could have a big impact on economically depressed areas around the country.

About 8,700 so-called “opportunity zones” have been set up in all 50 states to lure investors and developers with tax breaks, offering discounts of up to 15 percent on an initial investment.

Additionally, in these zones, capital gains won’t be taxed until the end of 2026 or when the investment is sold, whichever comes first, reported CNBC.

The administration said Friday that the goal is to create businesses and jobs in low-income areas.

“We want all Americans to experience the dynamic opportunities being generated by President Trump’s economic policies,” said Treasury Secretary Steven Mnuchin in a statement. “This incentive will foster economic revitalization and promote sustainable economic growth, which was a major goal of the Tax Cuts and Jobs Act.”

Critics say the new rules and the way the program is set up will benefit real estate developers and Wall Street funds, and will pull investment toward more well-off areas that need it least.

Kirk Douglas gives most of $61M fortune to charity, leaving nothing for son Michael

Solve Problems…Create and/or Act on Opportunities!