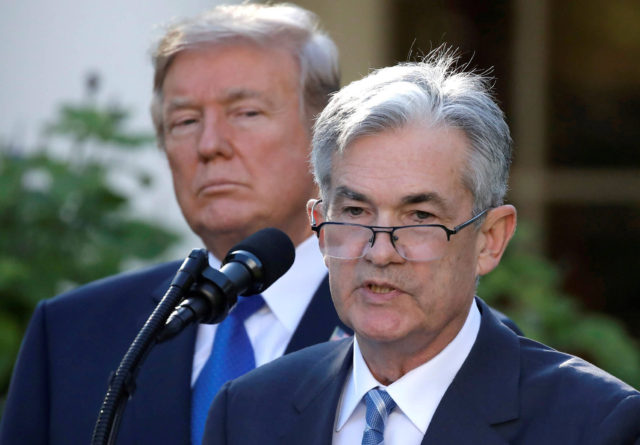 President Trump has asked internal and external advisers about whether he can fire Federal Reserve Chairman Jerome H. Powell, two people familiar with the exchanges said, in a sign of his mounting frustration with the central bank chief.

News of Trump’s discussions about Powell prompted rebukes from lawmakers and alarm among economists and Wall Street executives Saturday. In the evening, Treasury Secretary Steven Mnuchin tweeted a statement from the president: “I totally disagree with Fed policy . . . but I never suggested firing Chairman Jay Powell, nor do I believe I have the right to do so.”

The two people familiar with Trump’s questions about his authority to remove Powell spoke on the condition of anonymity to freely discuss the private conversations. One of them characterized Trump’s inquiry as a reflection of his rage over the stock market’s recent plunge and his desire to blame someone.

Many experts said the president most likely does not have the authority to remove Powell, whom Trump nominated to lead the central bank a year ago, largely on Mnuchin’s recommendation.

Trump has shattered many norms since becoming president, but one that has caught investors and economists off-guard is his willingness to publicly rail against central bank policy.

Beginning in the Clinton administration, White House officials ha ve largely avoided public criticism of the Fed, worried that any political pressure on the central bank could tarnish its reputation and cause investors and foreign finance ministers to question its actions.

President Trump looks on as Jerome H. Powell, chairman of the Federal Reserve, speaks at the White House on Nov. 2, 2017. (Carlos Barria/Reuters)

Trump cast this tradition aside. He has ranted publicly for weeks about the way Powell is leading the Fed, charting a course of slow but steady interest rate increases as a way to contain inflation.

The fact that Trump has spoken with advisers about whether he can fire Powell was first reported by Bloomberg News on Friday evening.

The stock market is on track for its worst year in a decade, with many sectors down more than 20 percent — technically a bear market. The sell-off continued in the past week — the worst for the stock market since 2008 — after Powell signaled that the Fed did not have plans to sharply change course.

Ferris Bueller House Back on the Market for $1.5M